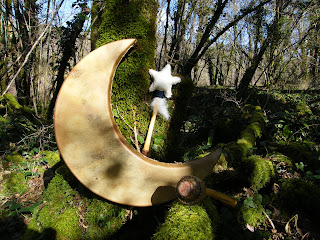 It must have been around the summer of 1999 that i made my first drum during a shamanic course with Maarten Bosscher/Thunderhorse and Jos Heerkens/Twobears, the drummaker, in Portugal. At first i didn’t want to join, but after meeting my drumspirit and the spirits Maarten was working was, i decided to go for it. During those weeks Jos’ and mine paths kept on crossing (literally) and we started living and later working together. We were looking for a name for the drums, so i asked the ambling fire for a name, and dreaming drums was the answer! In the beginning we thought, ok nice name, good alliteration,  and we slowly introduced it. However we learned that there was so much more to this name, the dreaming quality of the sound, the overtones, the journeying, and people also very  often dreamed of their drums. Sometimes they came to visit for a workshop to create their own drum, to discover that we already made the drum they dreamed of.

After many years we went our own way, i went to the UK, Jos went back to Holland. Very unfortunately and sadly Jos passed away last year. After that i moved from the UK to France, the Dordogne, to an old farmhouse in a gorgeous environment to be able to live the dream of making drums in connection with nature. On the land are two springs in the valley, and as often i saw Jos his eyes staring at me, there i realised he wanted to say goodbye, but also i understood a little more about the meaning of the name, it is also the bear’s quality of dreaming, living in his cave and hibernating, the quality of healing and dreaming. In this area are also lots of caves, even on the land, plenty of opportunity for meditation, drumming, connecting, healing. 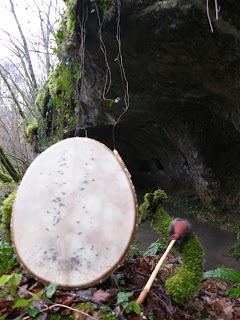 Our move to France wasn’t without problems, they kept all our stuff for two months because of a dispute between the two moving companies, although we didn’t know that immediately. The fear of loosing all the tools, wood etc for the drummaking wasn’t the best start for our new life. And a few months later my partner had a serious stroke and is still in the process of recovering.

The other day something strange happened though, when i came outside, in front of my workshop i found a little plastic bag, with a bear paw from Jos his black bear rug, some bear nails, but also his ceremonial necklace with a beartooth in it… I have packed, unpacked all his stuff several times, but never seen it, and there it is, outside on the floor, nearly taken away by the dogs…

It somehow feels that the circle is closing, and during the last workshop drummaking in our house, the man told me that he constantly had the feeling Jos was sitting behind him. 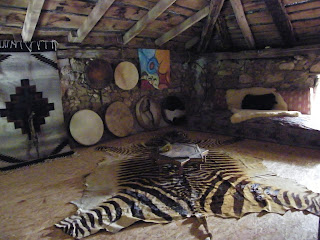 I really hope that we will find a new balance in our life, connect with nature and create many dreaming drums! 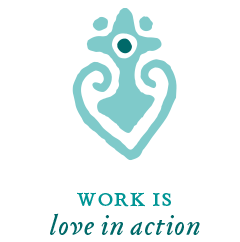